The snow swallowed the city in a dome of white and grey.  Every so often you could see a faint flash of red or yellow.  If you were able to see it sharply, it was too late; the vehicle was already too close.

His alarm startled him, sending a bolt of electricity through his heart.  “Crap!” he yelled, rising from his slumber.  He rose up on his elbow, then his hand and just sat with his feet dangling off the bed.  Rubbing the sleep from his eyes, he slid slowly off the bed, easing his feet down onto the icy linoleum.  Geez, do I have to? He thought.  It definitely was not a day for traveling.  Most people would stay home and watch television.  He sighed, and then reached over for his phone.  No messages.  “I guess we’re doing this…,” whispering to himself.  With the cold floor waking him up with every step, he entered the spotlight of the kitchen, put on a pot of water and headed for the bathroom.  Somehow the canary paint shined with the brilliance of the sun – or was it just too early in the morning?  He begrudgedly opened the medicine cabinet, grabbed a handful of vitamins, chucked them in his mouth and bobbed his head in the sink to drink some water.  Then he slipped into the shower and melted away in its warmth.

She stood in the doorway naked and dripping wet.  No movement; just still as a statute, staring at her wrist…a moment later a flicker of one finger.  “Come eat baby.  Breakfast is ready,” said the voice from the kitchen.  But it was a ploy, a white flag…a surrendering to the will of the naked statute standing in the hallway, a compromise to continue the day as planned.  But Venus did not budge.  She stood firm in all her great beauty, naked and unashamed.  The voice continued to prompt for a response.  Then, with no further words, put two blueberry waffles in the toaster…and waited.

The charcoal grey sky, gave way to a light heather grey.  The imprisoned sun was fighting to be seen but it was outmatched.  He peeked out the howling window on his way back to the kitchen to eat.  Bacon, eggs and cheese…? He thought. But the white bearded, Quaker starred at him from the cabinet. “Dag!”  Grabbing the box, he continued on with the original plan.

The blueberry scent drifted down the hallway.  Suddenly, the statute came to life.  She let out a loud screech of joy, tapped her wrist to her forehead and shot down the hallway.  The slapping of her bare feet on the floor put a smirk on her mother’s face.  She’d won this round.  The shivering, cold, purple-lipped, 70 pound, wet child leaped onto the chair.  She tilted her head, closed her eyes and smiled.  With a blank expression, she stared down at the plate…within an eye’s blink the plate soared across the room.  She screeched again, flapped her left hand and stuffed the waffle in her mouth with the right.  When her mouth was full, she commenced with the sharing of her food.  First, she smeared the waffles on the table top, though her mother protested against it.  Then, she shared her blueberry waffles with the wall, stove, refrigerator and her mother’s face…

“No, no…no!”  He shouted after looking up at the clock.  He rushed up from the table banging his hand and dropped the plate.  “Really!”  There was no time to worry about the pain.  He ran to the back to get dressed and ran his toe into the edge of the bed.  “@%#!”  Still the clock kept ticking away the time.  He tossed on his shirt, backward, tripped putting his leg into his jeans and forgot to shave…”Dang it.” He yelled running down the hallway, taking his coat he let out a long sigh, touched his face and thought, she likes fuzzy anyway.  The thought made him chuckle. He dashed out the door. “The bottle!” the yelled, shoving the door open.  Leaving the key in the door, he rushed back inside, snatched a small gift and a tiny bottle of water off the table and bolted back out the door. 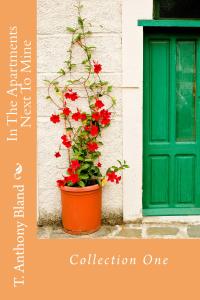